This past Saturday the Minnesota Golden Gophers played their in-conference rivals, the Iowa Hawkeyes, for the Floyd of Rosedale Trophy.  From the start of the game, the Golden Gophers showed dominance over the visiting Hawkeyes, riding a 35-7 lead into halftime.  Offensively, the Golden Gophers were scoring at will, running up and down the field behind redshirt sophomore quarterback Mitch Leidner, who finished the game 10/13 with 138 yards passing and 4 touchdowns.  Of the 4 touchdowns, 3 were caught by the redshirt sophomore tight end Maxx Williams.  The Golden Gophers would continue the slaughter through the second half, winning the game by a final score of 51-14.  The Gophers would regain possession of the Floyd of Rosedale Trophy. 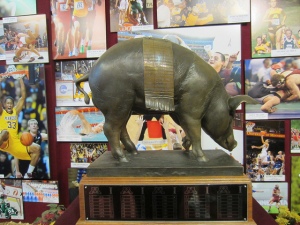 The Floyd of Rosedale Trophy

What happened in the  Golden Gopher locker room after the game was wild.  Minnesota head coach Jerry Kill was as fired up as his players after the big win, so what better way to celebrate it than to dance with the team.  That’s right, watch out Dancing with the Stars.  After watching these dance moves you may want to consider Coach Kill as a candidate for your show.

But this isn’t the first time that Coach Kill has got down after a big win.  Here is a throwback to last season when the Golden Gophers beat Penn State 24-10.

Watch out Coach Dantonio, you’ve got some competition for best dancing coach in the Big Ten.

Who do you think has the better dance moves? Coach Kill or Coach Dantonio?